I Am The Starlight

Richard Stilgoe
The Starlight Sequence ("I Am The Starlight") is the emotional pinnacle of the show, where Rusty, beaten, down, hopeless; discovers that The Starlight Express is there within him, and with some self confidence, Rusty can achieve anything.

The staging of the Starlight Sequence varies according to production, but always starts with Rusty alone, dejected after the Rockies' hard life lessons on "Right Place, Right Time", on a darkened stage. As the music builds, the star lights around him glow. As in the image right, in the London production, The Starlight Express appears behind Rusty onstage and makes physical contact with him. (the light levels have been greatly increased for this scene in photos however) In other productions, The Starlight Express sings from the wings and remains unseen. In the UK Tour, as Rusty finds his confidence, he actually flies and hovers several feet above the stage, with the help of cables that are pulled upwards.

The original London production used a hovering star-field that was lowered in to fill the stage, the original version of which was lights picking out the form of a train. In 1993 when the show was revised and the logo replaced, the orange/yellow "stars in the shape of a star" (as seen above) replaced the original train.

The Starlight Sequence begins with a short section of music that the score refers to as 'Rusty Alone'. The Rockies leave Rusty alone onstage to reflect on how bad his situation is. The melody of 'Rusty Alone' recalls the Coaches' section of "Call Me Rusty", a melody that represents futility/worry.

Rusty's left alone by the Rockies/Hoppers at the start of the scene. 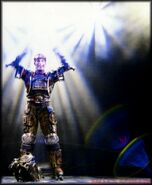 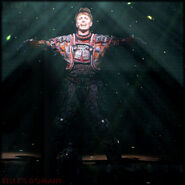 Bochum -the stage is filled with lights and lasers
Community content is available under CC-BY-SA unless otherwise noted.
Advertisement