British Rail would like to apologise for the delay...

Male
The British Engine is a genial, avuncular character who bumbles through the show. He arrives late and breaks down before he can enter the race. That is, if he ever turns up at all...

Originally the British engine was the "City of Milton Keynes", an Advanced Passenger Train. His costume was based on this train. His reason for failure has varied according to the history of British Rail. The Advanced Passenger Train project was enormously expensive and futile, with the trains never making it into full production. His excuse in the New London production was "Due to staffing difficulties", the UK Tour is delayed "Due to the wrong kind of weather". The Las Vegas show claimed "Due to the Royal family changing tracks".

He became the "Prince of Wales", the Royal Train when the Broadway production opened, providing a source of jokes at the expense of the British Royal family.

As a non-racing character he was not included in the Japan/Australia tours. He did not appear in the 1989 US Tour, but was reinstated for the 1993 Las Vegas production.

The British engine was added to the German production in 2018 as part of the 30th anniversary rewrites, named "Brexit". The costume design's gold and purple tie nods to British politician Nigel Farage, who, as leader of the UK Independence Party (Ukip) was instrumental in pushing for the Brexit referendum.

The British engine arrives late, and skates in backwards, laughing at his own mistake. He partners with Rocky 1 for the race, however he is scrapped before he can compete, allowing Poppa to take his place. He is usually seen again for the finale.

The actor who plays the British engine spends most of the show as a member of Greaseball's gang or a track marshal. 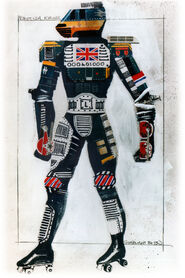 The London design was "British Racing Green" with yellow accents, with details of the union flag on his chest and the British Rail symbol incorporated into the costumes. John Napier's original design gives him a flying hat, a leather cap as seen on aviation pilots and early motorists, however in production the specific design references in his cap are somewhat lost under the details; the London costumes gave all the Nationals the same basic striped caps, and the Broadway costume added enough silver details to obscure the classic leather appearance of a flying hat.

The Broadway design, also used for the US/UK Tours, painted him silver, losing the reference to the specific shade of green. Broadway, Las Vegas and the tours made his colors look more like the APT than London. Otherwise the costume was accurate to the original design, a large, bulky, distinctive costume for a character with very little stage time.

Brexit's costume consists of a flat cap, a UKIP purple and gold tie with a white shirt collar, and elements of the original design in "British Racing Green". He is also the only National engine to appear in a deliberately dirty, broken down costume, typically British self-deprecating humour from the creative team. Bochum used a hybrid of London and Broadway racing masks with him being painted in what looks like GWR livery.

Prince of Wales, US Tour