Male
The German representative in the Championship Race is the InterCityExpress.

In most productions, he races with Joule and loses his eliminator heat. In the German production, playing to the home audience, he makes it to the final, but is wiped out by Greaseball and Electra.

Originally, the German engine was named Weltschaft. He was later renamed Ruhrgold.

In the Japan/Australia tours, Weltschaft had a double named the "Flying Hamburger".

In the 2017 workshop, he was named Rhinegold.

Ruhrgold is generally portrayed as focused on the race and determined to win. He's less interested in the politics and bickering, he just wants to prove he's the best.

In the London production, Ruhrgold collapsed on the floor when he lost his heat. His partner Joule hauled him up by his couplings, and spanked him as they left the stage.

In the original London production, Weltschaft raced with Joule in Heat 2, losing to Electra and Pearl.

In Germany he swapped roles with The French Engine, so that he wins the 2nd Heat and takes Joule to the final, but gets damaged, preventing him from taking part in the rerun.

In the UK and 2nd US tours, Ruhrgold raced with Caboose.

In 2018, for the German production's 30th anniversary, the show was re-written and Ruhrgold now races with the new Baggage Van, Carrie.

The London production changed the character's name in 1992, as part of "The New Starlight Express", but kept the green/grey costume. 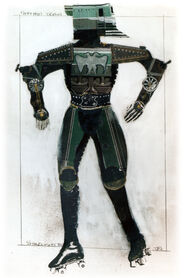 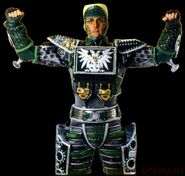