Todd Lester (Stunt Coordinator / Flying Marshall / Gang 1) has completed many Broadway shows including Starlight Express. He has found his niche as a stuntman and can be seen in film, TV and stage. Most recently, he did the features car stunts in Meter Madness, a new Columbia Pictures film. Todd dedicates his performance to his children, Jaisel, Kendel and Tam.

TODD LESTER (Greaseball Gang, Flat-Top). His Broadway credits include West Side Story, Merlin, Three Musketeers plus the national company of Cats during which his daughter Jaisel was born. Todd thanks Michal Fraley, his good friend and skate instructor. 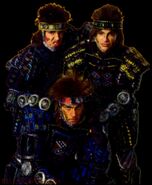 Gang (top right), Las Vegas, 1993
Add a photo to this gallery
Retrieved from "https://starlightexpressmusical.fandom.com/wiki/Todd_Lester?oldid=44103"
Community content is available under CC-BY-SA unless otherwise noted.