Tom Jobe (Bobo) was born in Las Vegas in 1953 and raised in Missouri. He began dance training at the Southern Methodist University in Dallas, Texas when he was 18, majoring in dance under Toni Beck. He came to England in 1974 to study at The London Contemporary Dance School and during his time at the school, dances in the Fergus Early/Michael Finnessy company, Dance Ogranisation; William Louther's Dance and Theatre Corporation, and was a founder member of Extemporary Dance Company in the 1975 Edinburgh Festival. He joined the London Contemporary Dance Theatre in 1975 and has had major roles in Solo Ride, Ice, Sphinx, Rainbow Bandit, Dances Of Love And Death and in his own choreography 9 to 5, One and Liquid Assets.

In the Spring of 1980, Tom left England and moved to New York where his career diversified. He co-founded a production company, 4-Front Production located in the East Village, New York and the first production was Live At Crystal Six, an off-Broadway showcase science-fiction musical cabaret, which he choreographed, directed, co-starred in and produced. He was also commissioned to choreograph a short dance for the film Time Bandits. His newly commissioned work for LCDT, Run Like Thunder to an original score by Barrington Pheloung, with designs by Paul Dart, will be performed at the 1984 Olympics in Los Angeles as well as The American Dance Festival and will be televised on Channel 4 in July 1984.

Electra, 1985
Add a photo to this gallery 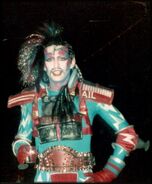 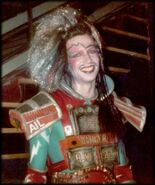 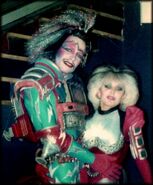 Add a photo to this gallery
Retrieved from "https://starlightexpressmusical.fandom.com/wiki/Tom_Jobe?oldid=42846"
Community content is available under CC-BY-SA unless otherwise noted.