Involved with the 3D races in the touring productions.

Trevor Hodge was born in Birmingham and has been to several dance schools in Birmingham. He has been a dancer since he was 17 and studied dance and drama at Coventry for a year in 1984. He has toured Europe with a professional dance troupe, Injection, for two months and has been roller skating for a year. His ambition is to be a very successful dancer and he is very proud to be in a West End show, especially Starlight Express. 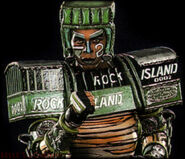 Rocky 2, Bochum 1989
Add a photo to this gallery
Retrieved from "https://starlightexpressmusical.fandom.com/wiki/Trevor_Hodge?oldid=43085"
Community content is available under CC-BY-SA unless otherwise noted.