My Dining car is out of food!

Turnov is the Trans-Siberian Railway Express from Russia.

He is a hard-working, hard-drinking, hard-fighting mean machine. His uncompromising attitude matches that of Wrench's the Repair Truck, making them a well-matched team in the original London production.

In the original production, Turnov raced with Wrench in Heat 3, losing to Poppa and Dustin.

When Starlight Express opened on Broadway in 1987, political subtext was incorporated into the show, pairing Turnov with Caboose. The Cold War was still in the air, with "The Russians" as The Enemy. The Red Caboose, an antagonist of the show, races with the Russian. This potentially echoing the "red scare"/"red threat" notions in response to those in allegiance to the red soviet flag, one Turnov wears on his chest.

Turnov races with Caboose in Heat 1 of the German Production, later shows having Greaseball call Caboose's name as if to prompt him to crash the Russian very early on in the race.

In the US/UK tour 3D race footage, he races with Ashley/Duvay.

Turnov's twin in the Japan/Australia tour was initially simply "Turnov 2", but later was named "Vladimir". Turnov and Vladimir raced with Caboose and Ashley in their respective races.

The 2018 Bochum Update introduced Turnov as "Putin's shooting star", but following the conflict between Russia and Ukraine, in February 2022 the line was re-written to be "Hashtag Oligarch". Oligarch meaning a rich business leader with strong political influence. After the introduction a small transaction from Greaseball is made to Caboose showing the intent of Turnov not being able to win the race from the start. 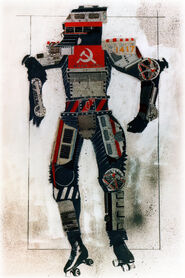