Born in Linz, she completed her musical studies in 2015 at the Performing Academy in Vienna. During her apprenticeship, Veronika appeared in the two German premieres of "Aladdin" and "Alice in Wonderland" at the Wiener Stadthalle, "The Making Of Austria" at the Museumsquartier, "Das Vorspiel" at the Theater Akzent and "Estelle" at the Ronacher Theater on the Stage. At the Eurovision Song Contest 2015 she supported Georgia as a background singer and joined the same year as a dancer at the "Life Ball" opening. In 2015 she stood for "Kiss Me, Kate" on the rock stage Staatz and went as a soloist in "Ms. Aidastella" aboard the cruise ship Aida. At the Summer Festival Steyr she took on the role of Anybody's in "West Side Story" 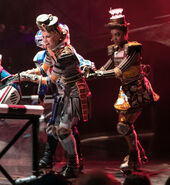 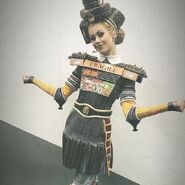 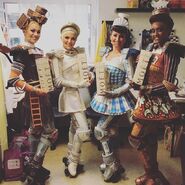 Opening Night 2018
Add a photo to this gallery
Retrieved from "https://starlightexpressmusical.fandom.com/wiki/Veronika_Hammer?oldid=48371"
Community content is available under CC-BY-SA unless otherwise noted.