Varies
Volta is Electra's freezer truck in Starlight Express. As part of the superstar's entourage, Volta is the Personal Assistant, closest to the boss, planned as his race partner in the original show.

As a freezer truck she is an ice queen - cold, aloof, elegant and beautiful. She does not speak apart from to insist that "Electra is Cool" - arguing with Joule who is her polar opposite - loud, impetuous and fiery. Although she is devoted to Electra, she is distracted by Greaseball singing "Pumping Iron", to his annoyance she, Joule and sometimes Wrench, leave their master to dance with his rival. In the original production, Volta was to race with Electra until she developed a "Headache" and Electra sent for Pearl instead. In later productions, Volta races with Hashamoto - an elegant couple, but did Volta really support a rival to her master in the race? She's certainly upset to lose mid-way along the track. But after the heat, Volta returns to her master's side, only appearing in his shadow.

In the London production, Volta was originally going to race with Electra until he decided he would rather have Pearl - In "Hitching and Switching" it was clear that Volta was Electra's partner, and Purse tells Pearl "His coach has a headache". In the Original production, "Pumping Iron" came before "AC/DC" in the running order, and as the Components had not yet been introduced, the actresses playing Volta and Joule also played 2nd and 3rd class sleepers to add extra dancers to the number.

Once the show went to Broadway, the running order was changed, and the Components danced "Pumping Iron". Volta went on to race with Hashamoto in Heat 1 in Bochum, but is disabled by Caboose. Volta screamed in anger when she was left behind by the racers.

In 2018, the Bochum production underwent significant revisions for the show's 30th anniversary. This included changing Volta's gender from female to male. His costume is only slightly altered, with grey leggings beneath the black chaps, and a smaller, "Emo" wig. Volta now races with Espresso in Heat 2. 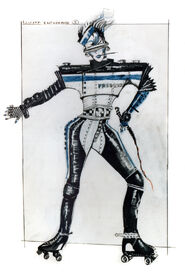 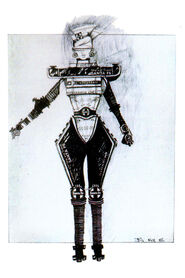 Freezers (technically called "refrigerator cars" and nicknamed "reefers") are diesel-powered. Fans may be curious as to why Volta is thus Electra's original race partner that Pearl replaced, but he could quite reasonably make an exception for a freezer. Volta is more than likely an "express reefer". Refrigerator cars carried perishable goods, and express reefers were designed to ride the high speeds of a passenger train. Volta would thus be able to handle the speed needed in a race.

Volta's (non-London) costume says "SHIP AND TRAVEL SANTA FE" on her left shoulder box and right leg. This is part of the slogan used by the Atchision, Topeka and Santa Fe Railway (ATSF). The full slogan is "Ship and travel Santa Fe all the way". [1] It is possible they took it off the last part due to limited space. The Santa Fe Railway (now merged with the Burlington Norther to form the BNSF) was one of the most successful railroads in the United States, gaining a song that was sung by Judy Garland in the film The Harvey Girls and covered by well-known artists such as Bing Crosby and John Denver. The Santa Fe was one of the chief competitors with the Union Pacific, which may have accounted for the costume designer's decision to have Greaseball's chief rival, Electra, have a Santa Fe freezer (as well as a Santa Fe repair truck). However, unfortunate contradictions arise with this decision. Volta's outfit is black to match with Electra's color scheme, but ATSF refrigerator cars were often yellow or another bright color. Furthermore, the ATSF was located in the Western States whereas electric engines were almost exclusively used by eastern railroads. However, Volta is a toy rail car, and train model designs are not always accurate.