Voyd is a British dancer and choreographer who created the role of Volta in Starlight Express.

She has worked with Arlene Phillips closely as both a dancer and assistant, helping to recreate Starlight Express for productions in Bochum, Japan, and Las Vegas. She now teaches dance.

Bochum - 1988 - Assistant to the Choreographer

London - 1990 - Assistant to the Choreographer

Japan Tour - 1990 - Assistant to the Choreographer

VOYD (Buffy) trained at the Arts Educational Schools and with Arlene Phillips, Libby Rose and Ivor Meggido. She has toured with David Essex and was a member of the West End Dance group. She has made several television appearances with Arlene Phillips, Flick Colby and Molly Molloy. Her theatre work includes Masquerade at the Young Vic, directed by Frank Dunlop. Voyd spent four years with Starlight Express. She was a member of the original cast and left to assist with the German production.

Film credits include Monty Python's The Meaning of Life, Paul McCartney's Give My Regards to Broad Street and the German production Anna.

In 1990, Voyd travelled to Tokyo to assist with the choreography for the Japanese production of Starlight Express. When she returned, she appeared in the Royal Shakespeare Company's production of A Clockwork Orange at the Royalty Theatre after which she worked with Molly Molloy on a production of Le Roi Pansole in Lausane.

Voyd resumed her role as Assistant to the Choreographer for Starlight Express in London and has now returned, after a five year absence from the Apollo Victoria stage, to play the part of Buffy.

VOYD (Volta) started dancing at the age of 9 at the local Ballet School and went to Riddiford Sweet School of Dance in her home town of Calne. At the age of 11 she went to The Arts Educational School at Tring, transferring to The Barbican. Whilst there she joined a dance group called Angst and performed in night clubs in London, namely Maunkberrys and The Embassy and on tour with David Essex. She then began working with Arlene Phillips doing TV shows and a musical at The Young Vic called Masquerade. Voyd danced on Top Of The Pops as a member of Zoo for two years and also worked with Jeff Richer in such programmes as London Night Out, Starburst and Entertainment Express. She danced with Jeffrey Daniel in the Paul McCartney movie Give My Regards To Broad Street and has appeared in the movie Monty Python's Meaning Of Life. 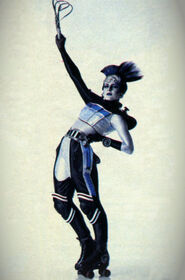 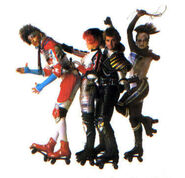 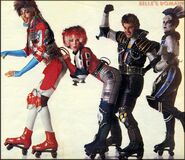 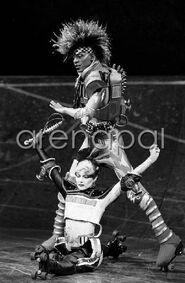 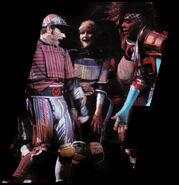 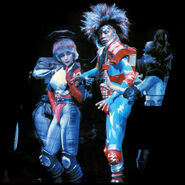 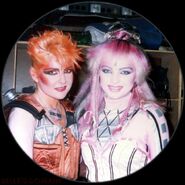 Voyd as Ashley with Charlotte Avery as Pearl 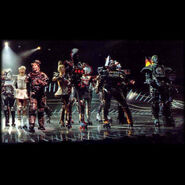 Pearl (cover), 1988
Add a photo to this gallery
Retrieved from "https://starlightexpressmusical.fandom.com/wiki/Voyd?oldid=47948"
Community content is available under CC-BY-SA unless otherwise noted.